← more from
Kung Fu Records
Get fresh music recommendations delivered to your inbox every Friday.
We've updated our Terms of Use. You can review the changes here.

When In Rome (Do As The Vandals) Plus 3 Bonus Tracks 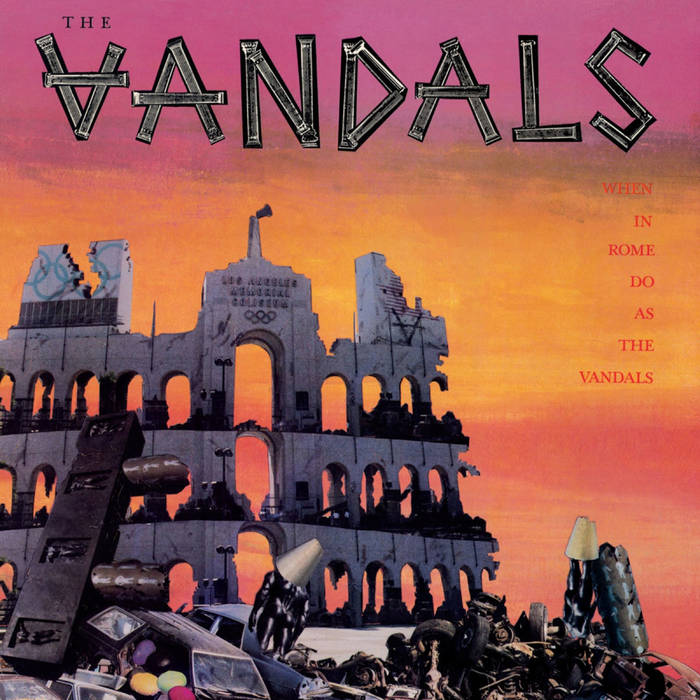 This is the follow up to the EP which saw the band enjoying a quick rise to the upper echelons of the L.A. punk rock scene with their debut radio hit "Urban Struggle."

In terms of radio hits, they knocked it out of the park with this release which sent Lady Killer to the top of playlists in several markets, but really L.A. and San Francisco were the only ones playing it heavily. Pressure got to the singer and he was finally left in San Francisco after a couple of extremely poor, violent, and drug infused performances in front of sold-out radio influenced crowds. That's what you get for trying to mix punk rock with the main stream before they're ready for it. When the band returned home from San Francisco they quickly hired singer Dave Quackenbush who carries on til this day.

This album also features the brief appearance of Chalmer Lumary on bass. He didn't actually play the tracks on the album because he broke his wrist right before the recording sessions so Brent Turner filled in. In 1985, Chalmer left and Joe took over on bass leading to the eventual dawn of the Josh Freese era in 1989.

WARNING:
The bonus tracks (which are only included on the digital download are a vulgar sexist, homophobic, disaster from another era, and a previous singer who was part of a generation that looked for any means possible to shock society. They were broadcast in 1983 live on the radio on KPFK in Los Angeles while tons of stuff was being thrown all over the place making it difficult to even perform at all.

Agreed, the banter is juvenile and the singer and the bass player at the time weren't very good at it, but there's nothing we can do about it now. If you are under 18, do not order these recordings. But if you like vintage punk rock. This is the real deal as it was done in the early era.

As snotty punk albums go, When in Rome seems unexceptional on the surface. There are the tasteless joke songs ("Viking Suite," about a man disturbingly fond of little boys in costumes, presented as a mock prog-style rock opera). There's the requisite cheesy cover ("Hocus Pocus" by Focus, renamed "It's Not Unusual," complete with tuneless howls and shrieks that are even more painful than the original's yodeling). One key difference is that the band is quirky enough to experiment with different sounds (rather than just three-chord punk) and flexible enough to be successful at it. From the mock Western "Mohawk Town" to the Caribbean lilt of "Rico," the Vandals display a surprising musical versatility. Lyrically, the band is still rather one-dimensional, relying too much on jokes and schtick (such as the cheap shots at RV dwellers on "Airstream"), although "Slap of Luv," told from the point of view of a domestic abuser, is a surprisingly astute character piece. Still, the Vandals definitely display some real originality and talent on When in Rome, making it a notch above most indie punk albums.