← back to
Kung Fu Records
Get fresh music recommendations delivered to your inbox every Friday.
We've updated our Terms of Use. You can review the changes here. 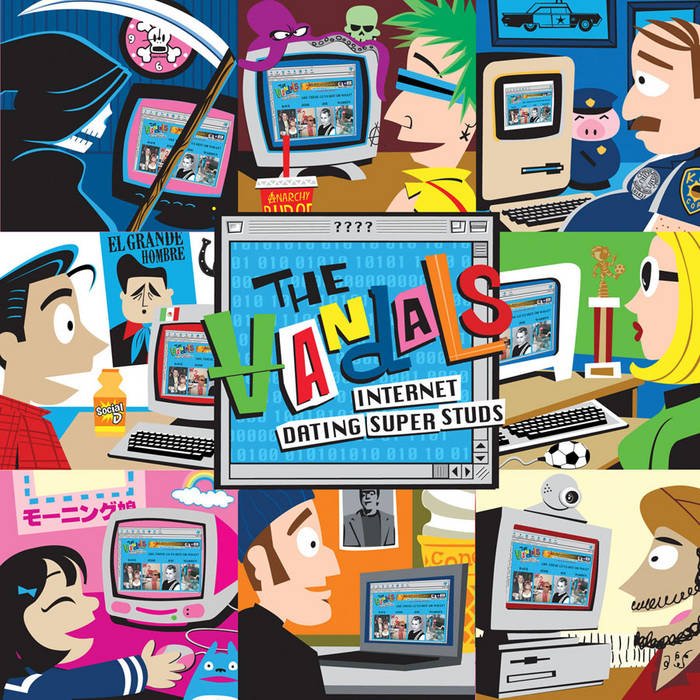 Shawn-Ray Dalinsky Not their best, but definitely not a bad album. I've already had the CD, but I bought this just for the instrumentals and bonus track which is really awesome of the band/label to share. Favorite track: 4,3,2,1,0,-1.

IDSS is the first proper Vandals album recorded after the band switched to their own Kung Fu Records from Dexter Holland's Nitro Records across town. We were very excited to have Paul Frank Industries do all of the artwork. Parker Jacobs was in charge of the illustrations.

How was the record received?

The way this CD was promoted was through an Internet Dating contest and a dating web site. The band had to go on actual dates with winners all over the world, from Cleveland to Osaka. Life-long friendships and inappropriate relationships were formed. To watch videos of some of the dates, just search around YouTube, you'll find them.

NOTES FROM THE PRODUCER (Warren Fitzgerald):
The first album I ever lost weight while working on, all thanks to a jump rope.

We mixed the album in Boston so we could use Paul Q. Kolderie (Radiohead, Pixies). Q Division studios in Boston has a vending machine that sells cans of beer.

Driving a car around Boston is the absolute worst.

On tour we milked the "dating" gag for nearly 2 years after the album's release. Our "dates" were contest winners who hung out with the band after shows. 90% of our dates were with dudes.

The bonus track Count To Ten was inspired by the contrived anger and pseudo-anguish spewed out by the Nu Metal bands who were popular in 2002. Yawn.

Disproportioned Head is about a real person the band knows, as is Where's Your Dignity? Both of these people are in bands more popular than The Vandals.

My girlfriend at the time got mad at me after reading the lyrics to "I Can't Wait".